What is the future of currently vacant properties such as:
Bring your observations and questions.
Guest: Danielle O'Leary
Director of Economic Development and Innovation
City of San Rafael
Chair: Kevin Hagerty, Glenwood Neighborhood

Special guest, Barry Miller, 2040 General Plan Project Manager
1. Summary of 2040 Steering Committee meetings - Jackie Schmidt (15 min)
2. The Neighborhood Element - Barry will walk us through the current 2020 General Plan's Neighborhood Element, its "Vision" and "Goals," to give us an idea of the work ahead, and how to craft updated versions that fold our own neighborhoods' plans into the City's own plan.

Our Sept 5th Sea Level Rise event at Bio Marin was a success. There were 39 attendees including Presenters and Federation members. It was an opportunity to hear directly from active and knowledgeable sea level rise specialists along with City and County officials. Residents learned about the nature, anticipated severity, and potential impact of sea level rise on our neighborhoods, as well as what is being done to address it. (See Flyer)

Video of presentations - Thanks to Carly Daniels of BioMarin for the use of her camera!

​You can view the meeting video by clicking here.

You can access the informational handouts from the meeting here, as well as PG&E information about their PSPS Program.

Sign up for Nixle notifications by texting 888-777 or clicking this link: http://www.nixle.com/

Discussed at our May meeting:

BioMarin, Whistlestop and Eden Housing representatives will discuss their mixed-use development proposal on the currently vacant brownfield property at 999 3rd St. (Photo below). The development plan consists of research labs. offices, and the Whistlestop "Healthy Aging Campus: with 67 units of affordable housing for older adults. 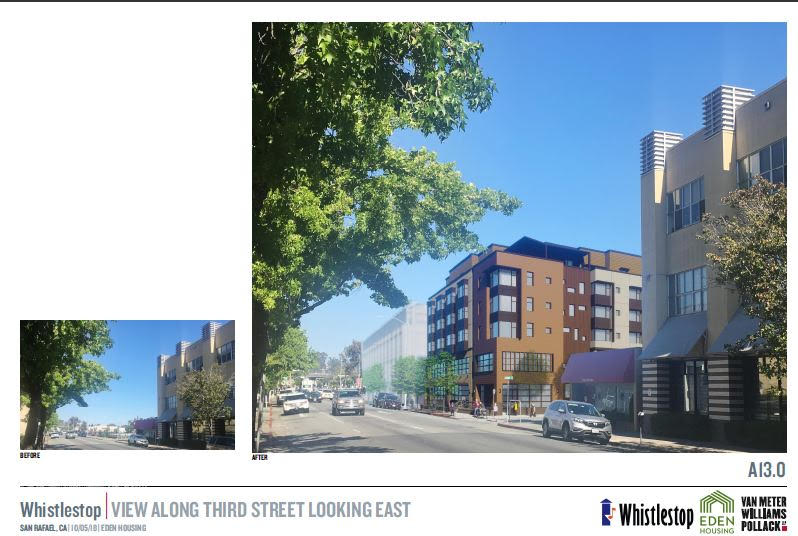 Highlights from our annual meeting

​Highlights included: Please review the slideshow below for more details on the meeting. Minutes from the meeting will be available soon. 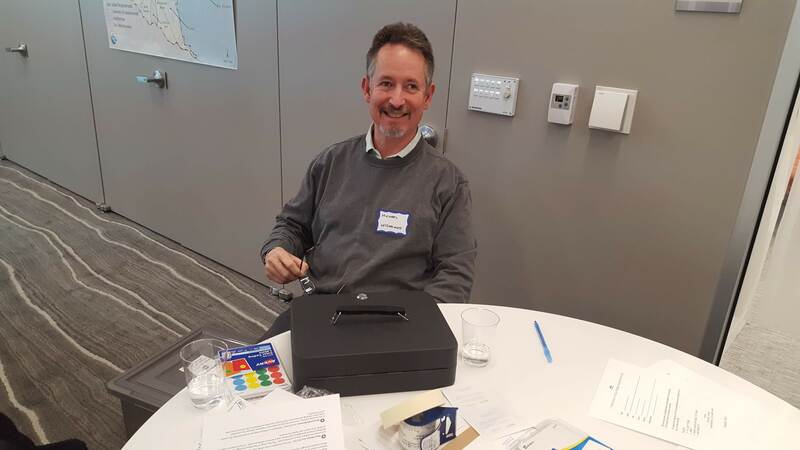 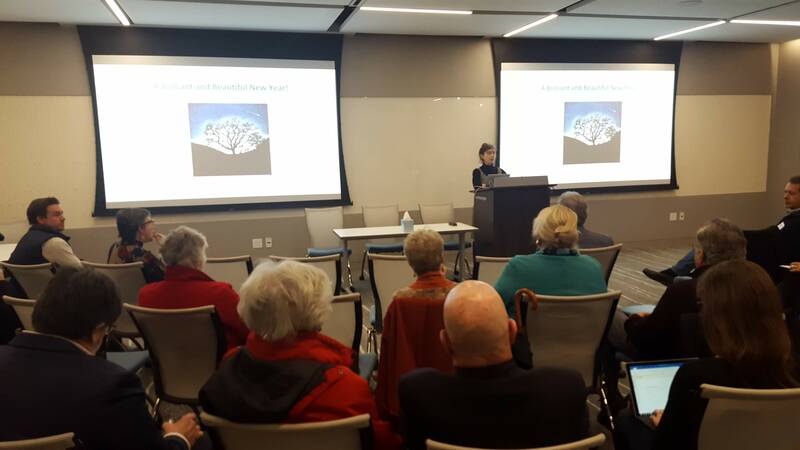 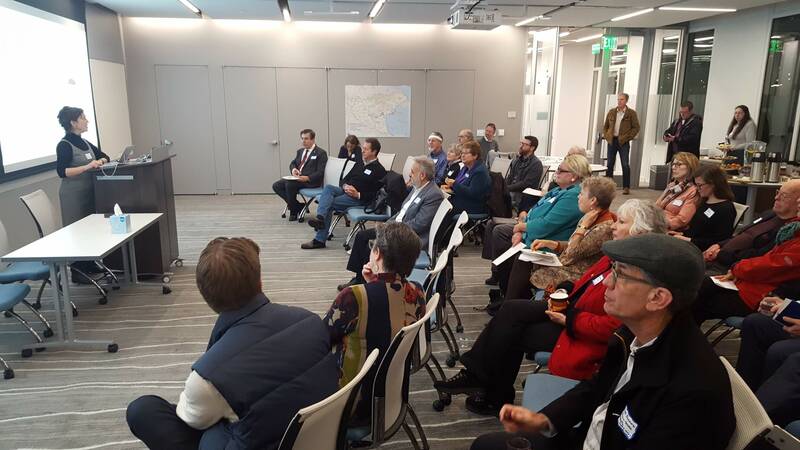 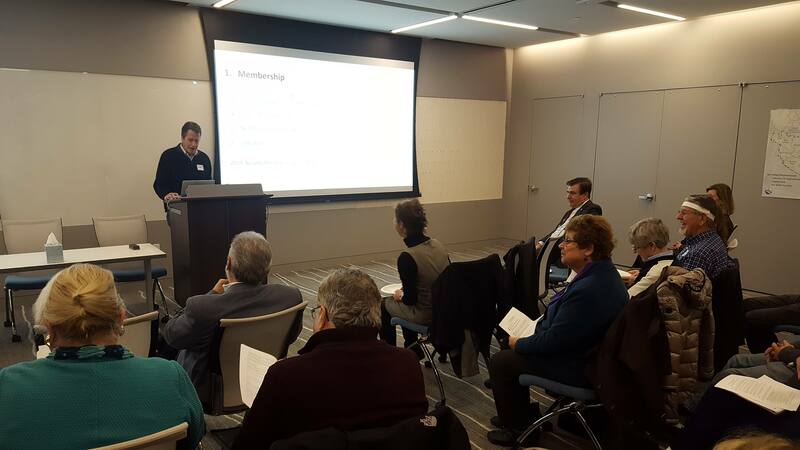 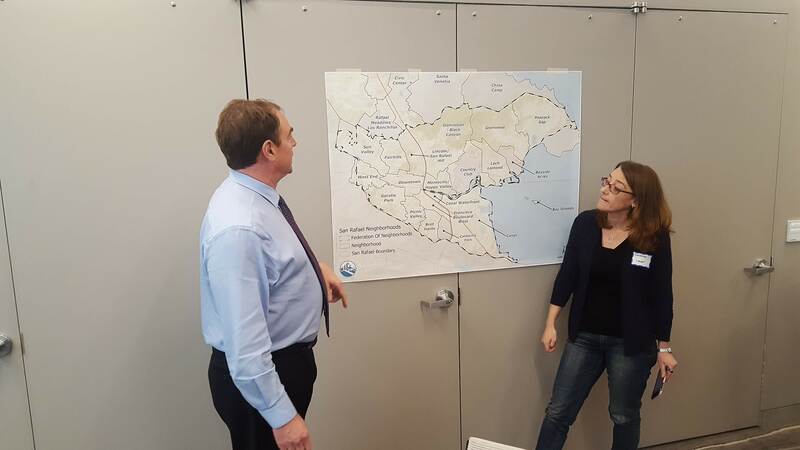 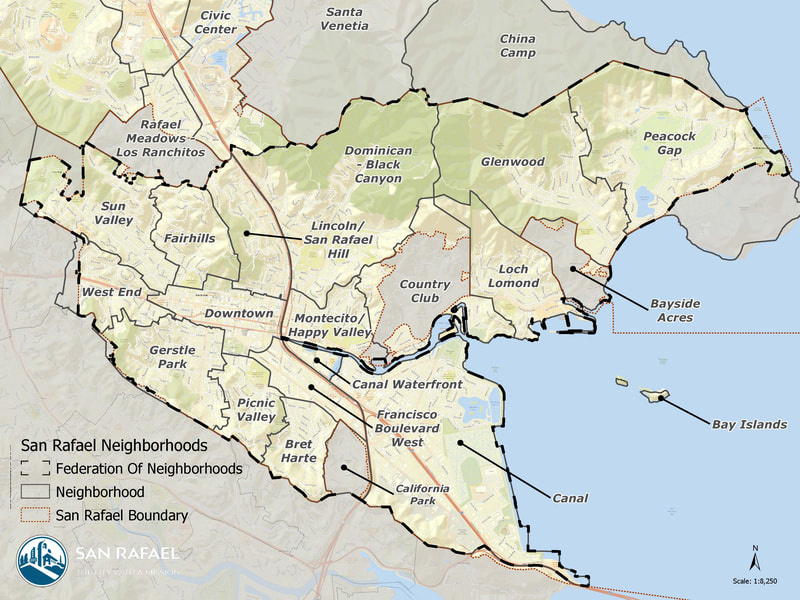 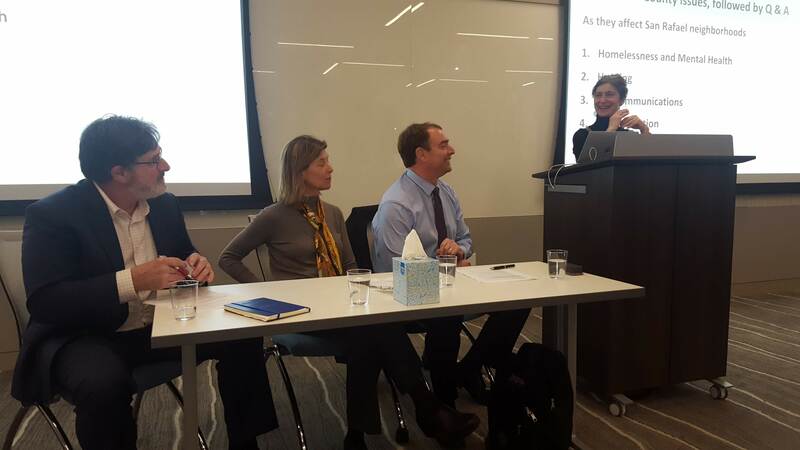 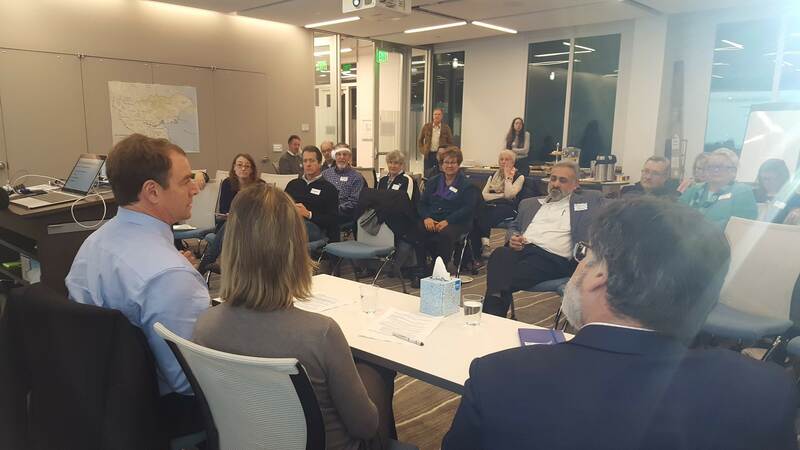 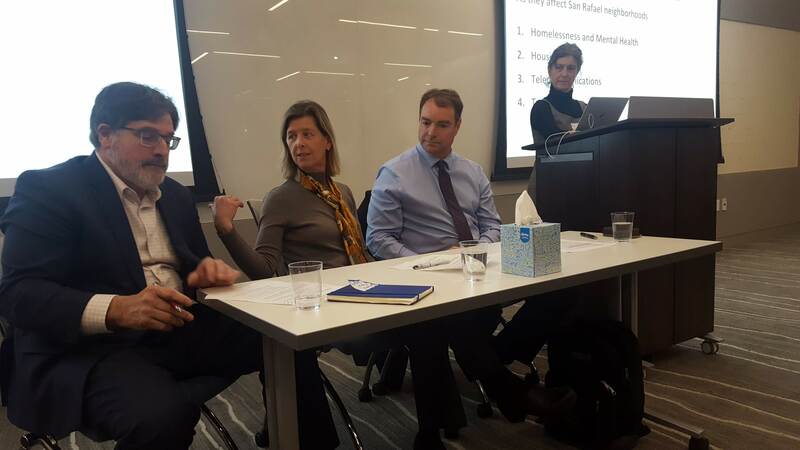 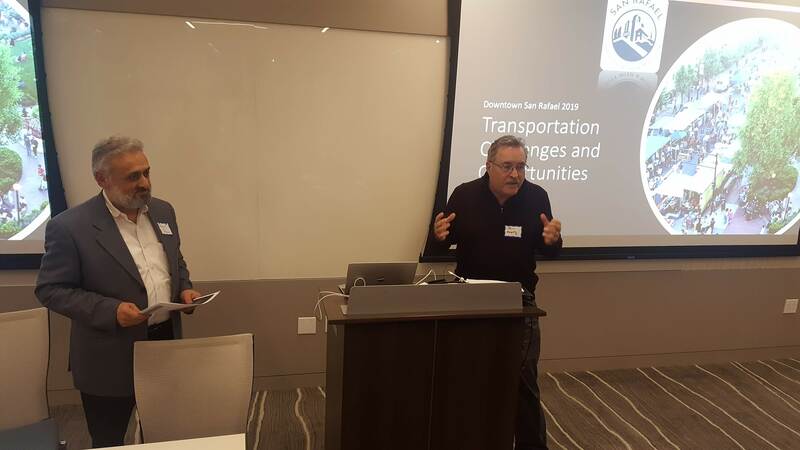 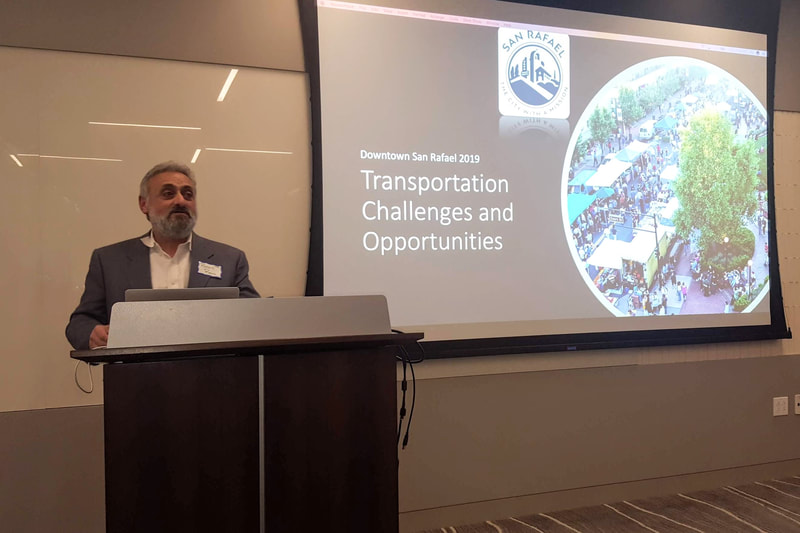 FED's letter to the Bridge Authority and City/County officials about the San Rafael Transit Center Relocation.

The Federation of San Rafael Neighborhoods met July 11 with Bridge District representatives Ron Downing, Adam Dankberg, and Paolo Schwartz in a frank Q & A about the four proposed concepts.  Federation members came to a consensus to endorse the Whistlestop Block concept, the most promising of the four, with several caveats.

As designed, this concept creates a welcoming gateway to San Rafael with the historic 1929 NWP Depot building regaining its traditional transit hub role while providing convenient access to buses and trains. This concept also looks like the safest pedestrian, bicycle, and vehicular proposal.  There is room for improvement, however.

1.     The three bus bays on Third Street must be relocated to an adjacent space.
2.     The four bus bays that line Tamalpais should also be relocated to decongest this narrow street, and to eliminate potential damage to the depot building.
3.     The block west of the Whistlestop building (Third to Fourth Streets, Tamalpais to Lincoln) might be acquired to house the seven relocated bus bays.
4.     Were #3 to occur, the historic taverns (“Taxi Office aka Trevor’s” on Tamalpais and “Tavern on Fourth”) must be preserved.
5.     The Whistlestop building must be preserved. We are in favor of the building as a transit hub, and see great potential at that location as a public welcome center with commercial space.
6.     A vehicular, pedestrian and bike route study to schools, between the Whistlestop Block concept and downtown and East San Rafael must be prioritized.  There is potential for rerouting of buses on Lincoln.

With the SRTC relocation, we are concerned about the potential sale of the Bettini Center.  Were the SRTC relocated near the Whistlestop building, the current Bettini Center holds promise for an enhanced downtown square and a safe crossroads for our residents and visitors.  There are excellent opportunities for housing nearby. It is our hope that discussions with the City and leadership from both the City and GGBHTD would preserve the current Bettini Center area for public usage.

Two years ago the Federation sponsored a visioning session with City, County, non-profit, the GGBHTD, and neighborhood representatives.  Consistent with our recommendations to you today, the consensus of that September 21, 2016 meeting was,

The Federation’s goals for this gateway location include:

•   Efficient flow of traffic from the 101 freeway and on city streets
•   Safe pathways for pedestrians and cyclists traveling all directions
•   An appealing, aesthetic, and welcoming townscape
•   Respect for our City's natural setting and history

We truly appreciated the candid discussion with the GGBHTD on July 11th.  There was synergy, problem solving, and agreement that the above goals could be realized in the Whistlestop Block concept with the adjustments we recommend.  Neighborhood members felt their voices were heard, and anticipate the ideas generated from that discussion will bear fruit, as we remain in contact on this very important issue.

2. View the four latest alternatives ...on this link - also a survey. To advance, click the small "NEXT" button

3. Bring neighborhood news and concerns for our last 25 minutes to plan for July's City/Fed meeting. The City canceled the June meeting, so let's get our real and urgent agenda items set.

The District Attorney plays a vital role in our community.
Join us for this informative event!

The District Attorney plays a vital role in our community.
Join us for this informative event!

Come one, come all, and call/text if you need a ride!

1. Albert Park - Danielle Sloneker from the "B Team" will present. She spearheads the AP renovation effort. I will put a vote to the Steering Committee to allocate funds for the important park renovation project.

4.  City/Fed meetings --- 3 cancellations in a row. Mayor Phillips promises a March meeting.  However, we must weigh in. Please consider a brief statement to the Mayor.

B. Seagate Design for 703 Third St - Across from the the Transit Center
Click here for Marin IJ Article

Neighborhoods, please report your news and concerns!
​
From the Fed's Jackie Schmidt: The San Rafael DPW will be presenting the details of a long awaited traffic study of the Third/Heatherton intersection. The meeting is being hosted by the Federation of San Rafael Neighborhoods, and is open to the public. The DPW hired a consultant to do the study, and the consultant has come up with several options for the City to consider to make that intersection safer for the buses, autos, bikes, and pedestrians who use it to get onto 101, travel out Third St. to West Marin, cross 101 to get to West Francisco, get to SRHS, get to the bus station, get to SMART, get to the bike lane alongside of SMART, etc. etc.  Four pedestrians have been killed at that intersection or nearby by vehicles in the last few years (at least 3 of the 4 were in cross walks, and were elderly.)
We also expect a report (via Steve Kinsey) about public input in the Transit Center relocation plans.

We hope to see you, and hear you voice your opinions since decision makers seek our input.

"Imagine getting off SMART at the San Rafael Station. What will it look like?"

Snacks and coffee will be served 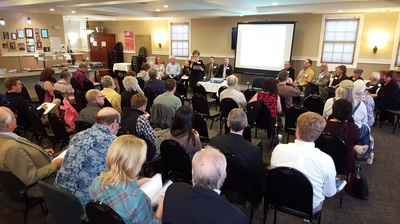 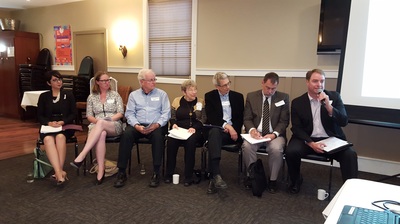 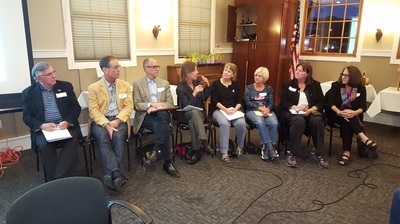 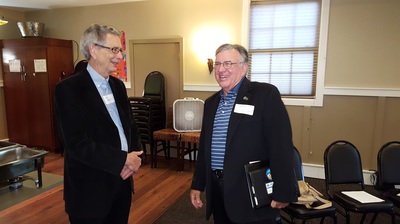 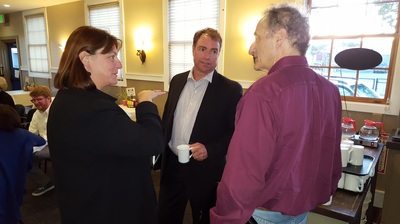 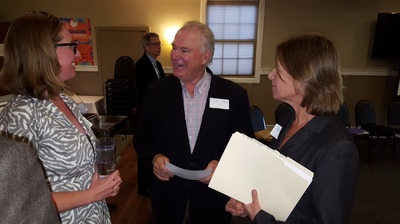 The panel’s discussion was lead by the foundational question:

What vision do each of you have to guide the very real decisions now being made in the Downtown Station Area, the future of the new transit center, the old train depot, our commercial crossroads, area creeks and pathways

The Federation’s goals for this gateway location include:
•   Efficient flow of traffic from the 101 freeway and on city streets
•   Safe pathways for pedestrians and cyclists traveling all directions
•   An appealing, aesthetic, and welcoming townscape
•   Respect for our City's natural setting and history

Transit (Bettini) specific comments:
·      Comment that the Transit Center may be the biggest challenge facing San Rafael now
·      Comment (by Mayor) that the Transit Center may cost about $30 Million and involves multiple agencies (SMART, Golden Gate Transit, Marin Transit, and the City); looking at several options—2nd to 4th; 3rd to 5th; 4th to Mission.
·      2nd highest use transit center in Bay Area (9,000 people/day)
·      Ideas have included buses on surface streets as interim plan
·      Closing 5th Street is among the options, but not promising
·      Consider closing 4th St. to cars, allowing trollies/shuttles and cross traffic.
·      Treat both sides of Tamalpais (east and west of tracks) as “found commons,” with consistent street trees, landscaping, streetscape and façade guidelines, creating a greenway
·      Perils of closing 5th given Mission bottleneck of train crossing making traffic worse there
·      (Mayor) Could see affordable housing over Transit Center or on existing Bettini site (3-4 levels)
·      Challenge of getting the flow of traffic and the train crossing through town to work with bus turning patterns and schedules
·      Address parking and other needs for ridership going north in transit center plans.

Moderator’s Follow-up Comments:
·      Create a greenway on both sides of the SMART track. Trees, art, public meeting places, new cafés announce and celebrate the City's new neighbor, the train. Could even be pedestrian streets.  A real bonus to new SR economic vitality. It's ingenious to bring nature to a street named "Tamalpais."
·      Create a greenway with indigenous plants along the multi-purpose paths. Link up with Tamalpais and creek greenways for an "emerald necklace" effect?
·      Feature San Rafael's genesis to the local waterways with a cleaned up San Rafael Creek & Mahon Creek. Native plantings to absorb water continue the “greenway concept.
·      CalTrans cleans up properties near freeway, to make them natural and welcoming.
·      Rethink the high-speed arteries 2nd & 3rd St and look at 101 on/off ramps for their slowdowns. Restriping to allow 2 lanes? Is there a better way to move the traffic? Are rotaries possible at Montecito? Alternative routing? Should Mission St. be one-way East or Westbound to loosen up backups on track? Pedestrian crossings?
·      Showcase the historic SR Station Depot building. Make it our "Ferry Building." Whistlestop continues ownership, and could possibly host "World-Class" high profit concessions in the building: top notch Marin cuisine restaurant upstairs, first-rate espresso bar downstairs w senior discounts etc.
·      Build a smaller matching "Mission-revival style building" where the Bettini Transit Center sits to create a welcome balance to that site. Could be the transit information hub.
·      Consider density, pollution, light and noise first before planning housing on site
·      Educate drivers to be attentive. [Post motorcycle cops at all 4 corners of the Station Area to cite bad drivers? This would send a message to all that the station area is off-limits to reckless driving.
·      Remember Jim Elias’ words of wisdom from MCBC's Jim Elias, "In natural settings people behave better." 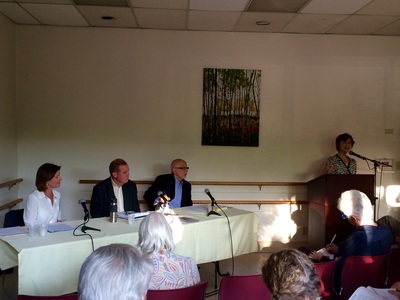 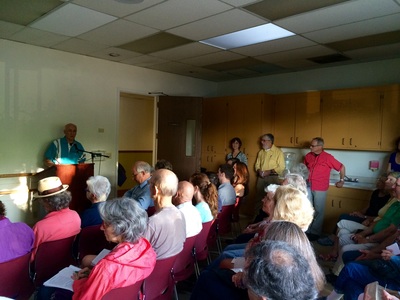 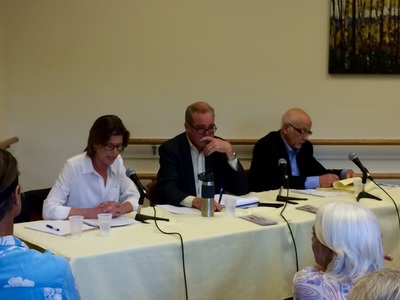 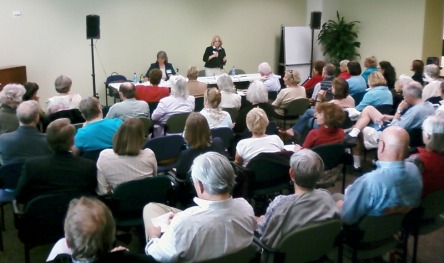 Incumbent Susan Adams and Challenger Kerry Mazzoni  respond to audience questions at the Federation sponsored Candidate’s Forum on May 13th, 2011 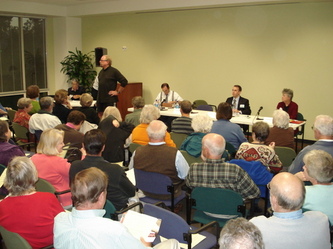 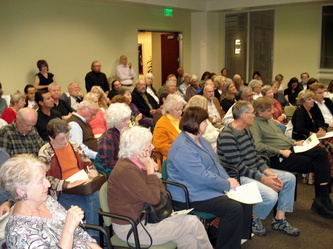 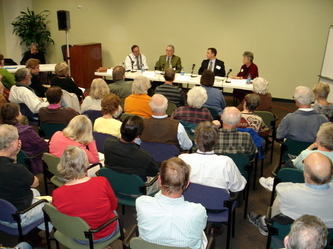 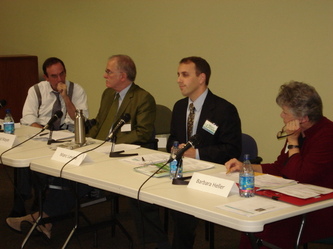